skip to main | skip to sidebar

Tammy Hall began playing piano at age four in Dallas, Texas. Her Mother was an aspiring classical concert pianist and her grandfather played piano at clubs on Saturday nights and at church on Sunday mornings. Tammy's earliest memories were of climbing up onto the piano bench at the tender age of two and picking out the notes and chords to songs she had heard in church or on the radio. Later she became the pianist for her Junior Choir rehearsal group and her elementary school's musical program.

It became evident that Tammy wasn't going to stop playing the piano, so both grandmothers pooled their resources together so she could receive private lessons. She then received classical training from ages 8 to 21. Her education was further rounded out by watching old film clips of Dorothy Donegan, Hazel Scott and Count Basie at her grandfather's projectionists (film) club. Tammy would sneak out to soak up this jazz unbeknownst to her grandmother, who disapproved of her listening to anything but classical music. These early experiences would form the triad of Tammy Hall's core sound: a fusion of Jazz, Gospel and Classical.

Soon, Tammy became the church organist for her godfather's church while simultaneously becoming involved in regional and national classical competitions. With several blue ribbons under her belt, she managed to win a fine arts music scholarship at the exclusive Hockaday School for Girls. Upon graduation, she received a music scholarship to Mills College in Oakland, California.

In 1987 she moved to Brussels and formed the group "Touche Différente." She performed both solo and with this group throughout Europe, playing venues including the Brussels Jazz Club, Club Machato, Der Zingel in Holland, the Ghent Music Festival, North Sea Jazz Festival, Antwerp Festival, Ostende Jazz Festival-Brugge, the Ferrari Club of Mechelen the Copacabana Club in Brussels, the Bierodrome Brussels, the Casino in Ibiza, and several Jewish festivals. Some of the players she collaborated with there include: Fabien de Griyse, Peter Cor, Gyle Waddy, Daniel Zannello, Mutzar Walley, Patrizio Battisti, and Noah Howard. 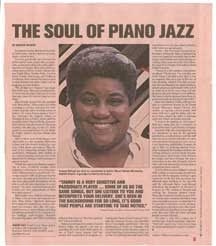 "What stands out most is her compelling lyricism. With an uncluttered, telegraphic style marked by her classical training and deep roots in the Baptist church, Hall gracefully combines elegance and grit. " --Andrew Gilbert

THE SOUL OF PIANO JAZZ


Jazz pianist Tammy Hall doesn't look like a troublemaker, but she's been known to instigate a brawl or two.

Over the past decade, she's become one of the region's most sought after accompanists, an essential collaborator with a glittering roster of top jazz, blues and cabaret vocalists such as Denise Perrier, Rhonda Benin, Linda Tillery, Frankye Kelly, Veronica Klaus, Connie Champaign and Debbie de Coudreaux. Hall's resourceful piano work is in such demand that some singers end up scrapping over her services.

"We all fight over Tammy," jazz singer Kim Nalley says. "She's put so much soul into every note she plays. And now it's worse than ever, since she's started doing her own thing."

Hall recently stepped into the spotlight with "Blue Divine" (Elfenworks), her debut recording as a leader, featuring nine well-crafted originals and a ravishing version of Jobim's "Se Todos Fossem Iguais a Voce." She celebrates the album's release on Thursday at Jazz at Pearl's, where she'll be joined by bassist Marcus Shelby, drummer Kent Bryson and percussionist Michaelle Goerlitz, who also play on the CD. Hall's quartet is also featured June 9 at the Berkeley Public Library's Re-New Orleans Jazz Festival.

After so many years of blending in with other artists as a side musician, Hall seems to have had little trouble finding her own voice. What stands out most on "Blue Divine" is her compelling lyricism. With an uncluttered, telegraphic style marked by her classical training and deep roots in the Baptist church, Hall gracefully combines elegance and grit.

"I think the experience I had accompanying so many wonderful vocalists really helped me to develop as a better instrumentalist," Hall says between sets at Pearl's. "Accompanying isn't difficult, because I had the experience growing up in the church, backing choirs and soloists. But putting out my own record with nine original pieces is really scary. The music is personal anyway, but to have your own compositions out there feels quite exposed."

Both as a vocalist and the owner of Jazz at Pearl's, Nalley has played a key role in spreading the word about Hall's talent. As one of Pearl's house pianists, Hall has worked with a succession of sax greats, including Mel Martin, David "Fathead" Newman and Houston Person, who described her as "one mighty soulful lady." After her performance at Pearl's on Thursday, Hall reunites with Person for his three-night run at the North Beach club starting Friday. And on May 29, Hall holds down the piano chair when Perrier records a live album at Pearl's, with Person as a special guest.

Perrier, a Bay Area musician equally authoritative belting the blues or interpreting American Songbook standards, has worked closely with Hall for more than a decade, including a three-year run in the '90s at Bentley's (now Perry's) in the Park Galleria Hotel in San Francisco.

"Tammy is a very sensitive and passionate player," Perrier says. "As a vocalist, one of the things I like best is that she's a true accompanist. She never gets in the way of your phrasing, which is why she's so popular. She can absorb all of a singer's feelings, and she plays very individually with each of us. Some of us do the same songs, but she listens to you and interprets your delivery. She's been in the background for so long, it's good that people are starting to take notice."

Born and raised in Dallas, Hall got her start as a performer playing in the Mount Moriah Missionary Baptist Church. Her mother, an aspiring concert pianist, died when Hall was 1, and her father, who she never knew, played the clubs on Saturday night and church on Sunday morning.

"I seem to be carrying on that legacy," Hall says, noting that she's co-minister of music at the Inner Light Ministry in Soquel.

Raised by both sets of grandparents, she was introduced to jazz by her paternal grandfather, a math professor and film buff who ran a projectionist club where he often screened shorts featuring jazz stars such as Louis Armstrong and Dorothy Donegan. By age 8, Hall was studying classical music, while soaking up the sounds around her, absorbing influences such as Stevie Wonder, Ahmad Jamal, Hank Jones, Cedar Walton, Joe Sample and Oscar Peterson. She won a scholarship to the elite Hockaday School, where she took informal jazz lessons from a sympathetic music teacher.

In 1979, Hall moved to Oakland to attend Mills College on a scholarship, but after two years she left the program, looking to gain experience on the Bay Area jazz scene. She attracted some attention in the mid-'80s with the all-female fusion band Beyond Definitions, but decided to try her luck in Belgium in 1987, settling in Brussels and working the European festival circuit. When she returned to the Bay Area in 1989, she was far more seasoned, and before long won a reputation as an ace accompanist. For 15 years she maintained a hectic schedule, holding down a day job as a law office bookkeeper while playing three or four nights a week. But since 2004 she's been devoting herself to music full time.

"It's been a real roller coaster, but I wouldn't give it up for anything," Hall says. "That's all I want to do. I want you to hear my music and feel good, or just feel, period."

Original article available online at sfgate.com.
Posted by Tammy L Hall at 10:21 AM No comments:

December 23 Biscuits & Blues: A Gospel Christmas with Kim Nalley (I'll be on the Hammond B-3)